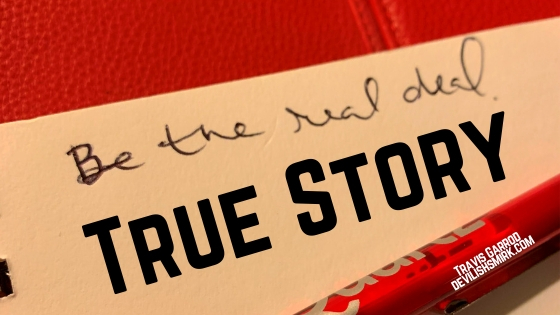 If you’d have asked me five years ago, today, where I’d be in five years, none of my answers would’ve come close to my current reality. I’d have told you, you were out of your expletive mind.

It happened. Here we are. Words of expressed reflection pouring from my fingertips.

At the time, I didn’t know how or where to begin, not beyond journaling and work email. Since I rarely journaled and had no job, a “blog” was an obvious choice.

I still don’t know much about being a writer, other than I spend a lot of time doing it.

In the beginning, I was curious what writers in history had to say. The message that resonated with me was part of a quote slideshow.

Whether or not that’s true, it stuck with me ever since. Its impact has everything to do with my mindset at the time: I had no end in sight.

Understanding that, I realized my journey to writing signified a beginning.

That’s when I registered Devilish Smirk.

I affectionately refer to Devilish Smirk as my hobby blog. It’s my training ground, one of the most important development tools on my journey to become a writer.

It was a day that would become a significant live PIVOT (Personal Insight Visible Over Time) in my life.

It was April 29, 2014, on the eve of the sale of et alia, I was in the Detroit airport en route to Scottsdale for the signing.

A sudden last minute contingency was placed on the next day’s contracts. It came out of left field and was non-negotiable.

I accepted the responsibility as if I had a choice. My future was contingent on passing that audit, not to mention $600,000.

I missed my connection and stayed in Detroit overnight. I caught the first available flight to Phoenix the next morning.

It was finally the day. Four months of negotiations, meetings, and conversations came to a head. The entire day’s meeting was videotaped, or it was set up to look like it was.

The first thing unnatural that happened was the press release announcing the sale went out several hours before the signing.

Complete silence from the newest partner who bought in 8% even though he was about to lose half his investment.

His vocal gripe was his moving package. I wasn’t extended a contract. I was coming over as a straight-up employee. There were no guarantees for me; I was dispensable. They could terminate me at any time.

At one point, the CEO asked me how I felt things were going. Before I could answer, he brushed me off like I didn’t matter.

The last 15 years of my life meant nothing.

Dance with the Devil

The partners of et alia sold its assets along with “all known and unknown lawsuits” to Kiewit Technology, Inc.

“Ever dance with the devil by the pale moonlight?”

After the five partners of et alia signed the purchase agreement, that’s the actual quote the then CEO of Kiewit Technology, Inc. (InEight) muttered.

He said it once the agreements were stacked neatly in front of him.

As he went in to sign I interrupted him, from across the table, with the rest of the quote from 1989’s Batman by Jack Nicholson’s Joker.

“I always ask that of all my prey, I just like the sound of it.”

The CEO’s ears perked up. He looked directly at me from across the table and said, “Travis, I may have underestimated you. I need to get to know you better.”

Immediately, my phone vibrated. It was a text from the et alia attorney who joined us at the table.

That night, at dinner, I sat across the table from the CEO. He told me that I had no idea how impactful it was that I knew the Joker quote earlier. He said it changed his opinion of me.

I remember it well since it was the first and only time I ever ate a raw oyster.

Another thing that the CEO told me about contracts, when discussing my lack of one, was that “all contracts can be gotten out of through loopholes.”

That stuck with me ever since.

The CEO went on to say that after I moved to Scottsdale, we’d have to get together at his house for dinner, and he would show me his bat cave.

I was 39 so it’s not like it was a pedophile thing. Needless to say, I never made it to the bat cave.

Over time, the impacts of his actions shed light on motives that began making a lot of other shit potentially make sense.

It was the strangest day of my life; the day we sold et alia.

Set Up to Fail

Leading up to the sale, the CEO initially wanted Brad, my co-founding partner, to fire me before the transaction took place. That didn’t happen. When push came to shove, I was at least offered a position.

Even still, the CEO even persisted and regularly informed Brad he was going to have him fire me within a year.

I passed the SAP audit in June, renewing partnership compliance for one year. et alia received the $600,000 hold back, and I kept my job.

I was promoted twice the latter half of 2014.

At my first review, my manager said, “the expectation was that you’d get here, and you’d fall on your face.”

I was one of three promotions announced in December 2014 for new roles in January.

The review I received in February 2015 was great. My manager was incredibly happy with my performance, his sentiments reflected in the review he wrote.

A good place to start for the truth would be Kiewit’s then Director of Government Relations.

She only played a role in a few major incidents affecting me. Maybe her side could shed more light on why.

After 11 months and two promotions, they lumped me into a layoff of 30+ employees – some of whom participated in an investigation of anonymously reported HR incident(s) involving the CEO.

All previous attempts to get rid of me failed. They did it that way.

Overnight, I didn’t have anyone to manage, help, or assist. I had had nowhere to be, and no one to see.

I’d spent my entire career bound to the corporate world. After almost 16 years, I found myself jobless without many options.

I had mixed feelings about it, but I knew, deep down, I’d rather die than have anything to do with that industry.

Plus, my attention was increasingly focused on other options. And I never signed a confidentiality agreement.

Making Sense Out of the Nonsensical

I loved to write, but I’d never written anything for myself.

My degree is in Journalism. Of all things. This should come as no surprise. Finally, my college years made more sense.

My college experience was a whirlwind, but I didn’t attribute anything happening in my life because of my degree.

All this time I thought college was for the multitude of other experiences it afforded me. My inner journalist was stoked, but journalists aren’t beloved by everyone in this world.

The end of this story is clear. There’s nowhere to go but up from here.

The events of yesterday matter as much as you make them.

Reel into your core, and have honest conversations with yourself. Look in a mirror if you have to. Eventually, you won’t need one. One day, the scales tip.

I realized the fine line between being careful and careless. Too much in one direction, and the overextended end flips your life in unproductive ways.

It’s a line I toe daily.

The Devil Made Me Do It

Five years is a good timespan for the beginning and end of a story.

What the Hell Happened in Scottsdale?

Reading my stories from the top-down is a reverse version of my evolution, but an evolution nonetheless, but there’s no wrong place to start.

It is a form of Choose Your Own Adventure! Eventually all the stories tie into one another, and yours hopefully makes more sense.

*Currently In theaters in the future*

Where will you be in five years?

I can’t believe I was eating a raw oyster, or that I was celebrating anything.