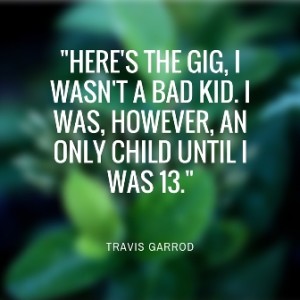 Once I began thinking about when I’ve considered myself a troublemaker, almost immediately, five ideas were fighting for my attention. Me! Me! Me! I jotted them down as eagerly as they emerged and slowly, but surely, more and more of the class stepped forward. The result resembled a scattered, unorganized table of contents and the inspiration I needed to take a much longer trip through the past – a very distant past – and do what I’ve always said I would do. Write.

As it turns out, writing about your own bad behavior is tremendously fun. It’s a great way to knock loose a cakey layer or two that, after 30+ years, has developed, hardened, and hinders (defends, perhaps?) your memory. I’ve stumbled on things that I don’t believe my parents even know. It was as if Octomom’s octuplets had octuplets, then they had octuplets, and so on.

I was the first born grandchild on both sides of my family. Talk about spoiled! I’m kidding, I really wasn’t spoiled but I received a lot of attention. My mom had five sisters. Her three younger sisters were still in high school so there were a lot of options for babysitting and they all loved their first and oldest, most amazing, nephew.

I was front and center in the eyes of both sets of grandparents, six aunts, and two uncles. They all eventually married, but it wasn’t until I was three when my first cousin was born. It exploded from there.

All seemed great until my parent’s divorced when I was four. This was a big turning point in my life. I was incapable of understanding something so complex. I told them over and over how easy it would be for them to stay together. Of course, they didn’t see it that way and that really upset me. They didn’t understand how easy it was. Why weren’t they listening?!? I thought it was more about me than it was them. No matter how many times they tried to explain, it didn’t make sense.

When I started kindergarten, I lived with my dad while my mom moved into her own place. This is when I started acting out and grasping for attention even though I spent regular time with both sides of my family. The only thing that seemed to change was that my parents no longer lived together.

When I was eight, my dad married my stepmom. It was around this time I really sharpened my sarcastic abilities. We weathered a handful of difficult times but, as adults, we have an absolutely fantastic relationship.

At the time I left for college, my third brother had yet to be born. I am old enough to be his father. My three half-brothers are 13, 16, and 22 years younger than me.

It’s scary to think that the youngest is about to start his freshman year of college. To think that I could already have an empty nest is mind boggling. I’ll pretend I didn’t just say that. So, there you have it, a glimpse into my past. I’ve had  41 years to simmer and I’m ready to write.