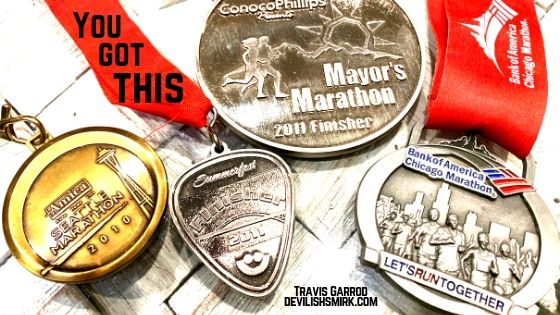 Even for the most athletically inclined, getting back into an exercise routine after being out of the game for an extended period of time is an obstacle.

In my case, that period of time has been over five years.

Actually writing that feels like failure. It doesn’t feel good to say, or read. That means it’s out there for anyone to see – strangers, family, friends, or otherwise.

It’s like admitting an addiction to complacency and laziness. But that’s the first step in any recovery, and that’s the purpose of this post: Personal accountability to myself.

Hi, my name is Travis, and my lazy game is on point!

I say that tongue-in-cheek; I’m not completely sedentary. I have a dog and she requires at least two walks per day. What I’m saying is, it’s been over five years since I’ve gone out of my way to workout.

It’s high time for that to change.

In February 2014, I ruptured my Achilles tendon while playing volleyball. It happened on a Sunday night. By Wednesday afternoon, I was in surgery.

I had physical therapy, but I haven’t been back to a gym since. It took eight months to not limp anymore.

Leading up to the injury, I had memberships at two gyms and had two personal trainers. I was in the best shape of my life and that all came crumbling down with one misstep on the court.

Three months later, I moved to Scottsdale and my life was flipped upside down.

I never climbed back on the workout wagon.

Suddenly, it’s 2019 and I’m left wondering, where has the time gone?

Metaphorically speaking, you can’t walk a mile in someone’s shoes until you run a marathon in your own. It just so happens, I’ve run actual marathons. Three, in fact.

I was about to turn 37 when I decided to run my first marathon. I wanted to accomplish something physical; something that required a certain level of discipline with a rigorous training schedule.

When people finish marathons, they get a medal. A marathon was an obvious choice. I wanted a medal, and I actually have four!

There is a purpose to this marathon tangent. When I decided to run Seattle, I read an article that suggested to pick a destination, register, and announce your goal to your friends and family. First, you have a vacation on your calendar. Second, you’re committed, and any deviation from your goal results in having to go back on your word.

That’s one hell of a motivator.

A Labor Day to Thanksgiving Journey

That’s what this is; my public commitment to myself. Between now and December, I’m joining a gym and I’m going to milk the hell out of that membership.

Sadly, this commitment involves no vacation. It involves going to a pop-up gym that shares a parking lot with the grocery store I frequent.

Earlier this summer, I set a goal to join a gym by September 1. That’s tomorrow. I tried joining today, but discovered a minor set back straight out the gate.

This particular gym has 24 hour access, but not always staffed. It’s Saturday and they were already gone. Then, I noticed it isn’t staffed on Sundays, and Monday is a holiday.

The Universe is testing my resolve. After five years of no workouts, the day I muster the energy to start, I couldn’t!

All that did was make me more determined than ever. So I wrote this story.

With any luck, come December, I will arrive at a renewed and improved mental space, which is usually the result of a vacation anyway.

The benefits I reap are in direct proportion to the effort I give.

Baby steps, Travis. For now let’s try fitting back into those suits you bought when you moved to Scottsdale in 2014.

That, my friends, is how you hold yourself accountable to a goal.