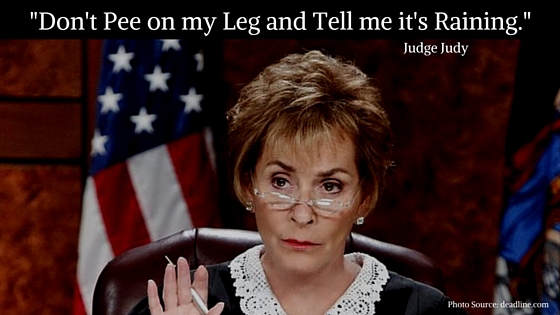 “Did you vote today?”

No, not voting isn’t a vote. It’s literally not a vote.

It’s been a tumultuous year in U.S. politics. Some Americans are so disgusted, many say their vote in November will come in the form of not voting at all.

How does that work? It doesn’t.

Most Americans don’t fully support either ticket, much less the party platforms. However, there are only two candidates who have a chance at winning.

Be part of the solution, not the problem. Swallow your pride and make a damn decision.

This one should be easier than figuring out what to do for dinner.

In the land of the free, you have the freedom to be stubborn. If you want to sit on the sidelines this year, that’s your choice. Bite that hand that feeds you and punish America by foregoing your right to vote. I can’t imagine anything more American.

Except, I don’t know, actually voting?

Take your ball and go home. Don’t be a poor sport because the game isn’t going your way. You don’t like the players. You don’t support the teams. You go home, alone, and play with your ball, pretending it’s a game. Don’t be selfish.

This election isn’t about Republicans and Democrats. Get that out of your head. The bases will disagree, but this election is about humanity. It’s about common decency. It’s really that simple. This election will define America’s collective conscience for the rest of the world.

Three’s a crowd. My heart dropped when the supposed nominees became official. I believe the majority of Americans realize the desperate need for a third party, but now isn’t the time. Reread the previous point. Voting third party only supports the greater evil. If you do, at least you voted. Somewhere in your mind you have to know it’s a wasted effort.

If neither earned your vote, which one lost your vote? If they’re not worth voting for, they’re worth voting against. What better way to send a heartfelt ‘fuck you’ to the candidate who failed you?

Failure without consequence? Come on!

If you’re anti-Clinton, you should vote for Trump. If Clinton annoys you so much, go ahead and vote for Trump. Do it. I dare you. You’re the one who has to live with your decision. Good luck sleeping at night. Seriously, go cast a vote for Trump if you believe Clinton is the devil’s spawn. Just one request – be proud of and stand by your decision!

Bernie Sanders supporters should vote for Clinton. That’s right from the horse’s mouth so I can’t say much more. Bernie cares about you. He endorsed Clinton. By not voting, you’re failing the candidate you so-called “supported.”

Still undecided? You’re either lying or in denial. By now neither candidate has anything new to say. Now, the claws come out to motivate people who never vote by scaring them with rhetoric. Trump’s only going to get worse. Clinton is only going to gain more surprising endorsements. It’s almost as if the decision is being made for us. But, it isn’t and the bullshit polls will remain close. The truth about the choice America will make on November 8 is being laid out.

If you won’t take a stand for yourself, take a stand for America. There’s only one side who doesn’t think everyone should vote. Gosh, I wonder why. That’s because they know they would lose. And it’s not because people are uninformed. It’s because the majority of Americans know the difference between right and wrong.

We’re all in this together.

Even the people who disagree with what they just read.

One thought on “Is not voting, in a way, voting?”