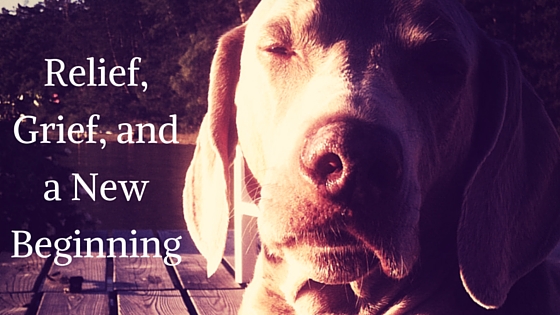 I expected I would soon bid farewell to Marco. He was 14 and had surgery in October. By February, another ailment diminished his ability to walk.

We suspect cancer, but never confirmed. He deteriorated quickly so we simply made the best of his remaining time.

His spine became contorted and his hind legs couldn’t support his body beyond hobbling from bed to his bowls to the backyard and back to bed.

Eventually, he stopped returning from the backyard. Instead, he laid down in spots he never laid before. He looked sad and tired and finally looked his age. 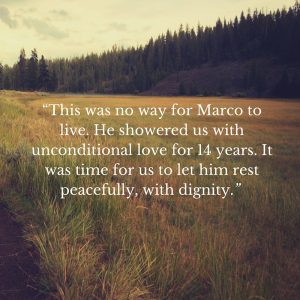 His body was failing; medication was useless. One night he stopped walking entirely.

The day I woke up knowing Marco would be gone before I slept again was one of the saddest days of my life.

We didn’t have a set time that day – we had an ‘arrive by’ time.

We reminisced and thanked Marco for all he gave us over the years. We cycled through laughter and degrees of breakdowns as the day wore on.

Every memory ended with the harsh reality that he was leaving us within hours.

The biggest hurdle was taking Marco to the car understanding it was his last exit from my house.

In the car, Marco had an energy I hadn’t seen in a while. He smiled and wagged his tail once again. The excitement in his eyes was comforting. It’s as if he knew and told us it’s okay.

We carried him into the vet clinic. Our tears spoke for us. There wasn’t a dry eye in the waiting area as the staff escorted us to a private room.

We cradled him as he was prepped for injections. By the time we were ready, Marco was sleeping. The vet explained what would occur. As the final breakdown ensued, a single nod gave the green light.

We sat with him until his final breath.

I was sad leaving the vet clinic, but relieved. I felt lighter. The worst was over and it was time to grieve.

I broke down everyday for two weeks. My house felt empty. I felt empty. Everything reminded me of unconditional love lost. I swear I heard Marco bark from other rooms. I caught glimpses of him in my peripheral vision, but saw nothing when I looked directly.

Denver and Marco added so much to my life and the lives around me.

What dogs provide us is worth every painful responsibility required when owning them.

Through their lives and losses, it became apparent how much of a ‘dog person’ I am. Letting our loyal companions go will never be easy, but I will do it again.

I wasn’t looking for a puppy when a friend sent me the link that led to Bella.

If you would have told me a girl would change my life this year, move in, and I’d pick up her crap, I would have told you that happened two years ago – and his name’s Eric.

Bella was born on January 30, 2016. I’ve accidentally called her Marco and Denver, but her nicknames are piling up.

She makes me smile. She’s a positive spirit and loves everyone. Her eyes say everything. She makes me happy and makes me think. I feel like a kid when she’s around. Best of all, she doesn’t care about my alleged snoring.

I pick up her poop and she tries to get in the bathroom when I poop. That’s a first.