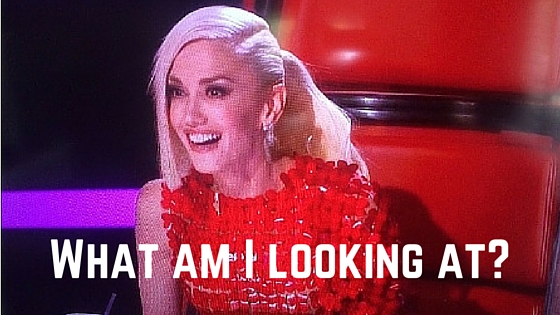 If you watched ‘The Voice’ premier on September 21, you saw the blind audition of contestant Jordan Smith from Harlan, KY. He performed Sia’s ‘Chandelier’ and pretty much nailed it for the first round.

A small town kid with the talent to hit complicated high notes, he won the judges over. All four turned around before he finished which is what every contestant aspires to accomplish at this stage in the competition.

Blake was the first to turn. A few notes later, Gwen and Pharell looked at each other, threw some side-eye, and turned around simultaneously. Pharell acted normal. Gwen lost her shit.

Gwen’s reaction to seeing Jordan’s appearance after hearing his voice was cringe-worthy. Her whole spasm caused me one giant face-palm.

At first glance, all she could do was be confused, throw her leg and hands up and twice exclaim, “Whaaaaat?!? WHAT?!?”

It’s one thing to be surprised when you look at somebody. It’s a whole other thing to be incessantly hung up on how shocked you are about their looks and persist with your blown mind. I expect a four-year-old to act this way, not a 45-year-old.

Adam turned around after just enough time passed for Gwen to contain her leg. Gwen turned to her right and threw a “What?!?” Adam’s way as if to ask, ‘Do you see what I see?!?’

Adam intently listened to Jordan as he finished his performance. Gwen stared and looked like her head was going to explode. 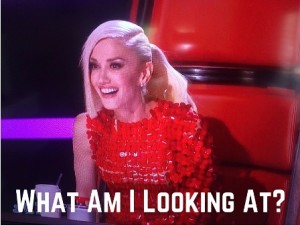 As quickly as the audience and the other three judges gave a standing ovation, Gwen rushed the stage to touch Jordan to make sure he was real.

Sure enough, he was! Then she had to tell him herself just how shocked she was.

After all that, she still continued to be blown away. Climbing back in her chair she turned to Pharell and said what? You guessed it.

Everyone sat and the judging began. Gwen didn’t ask for Jordan to join her team (or at least they didn’t air that). She did, however, say the following:

She did. She threw the “FYI” in there. Pharell interjected over Gwen’s ‘freakiest thing she experienced in her life’ and explained what she was trying to say in other terms. 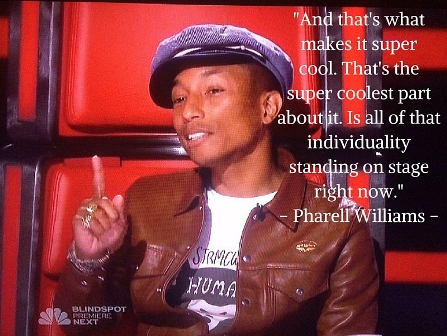 When the other judges are swooping in on the heels of your comments, it’s time to shut your mouth. Her best compliment to this poor kid was how surprised she was that he didn’t look like she thought he would. Gwen’s better than that. She’s just been an L.A. girl for too long.

But it was Adam who Jordan chose as his coach. The other judges (Gwen) can learn from Adam. You see, Adam listens. Adam relates. Adam says all the right things and he’s a good coach. It took me a few seasons, but I’ve grown to really like ‘The Voice.” It’s still early on, but wishing Jordan and Adam the best of luck this season!