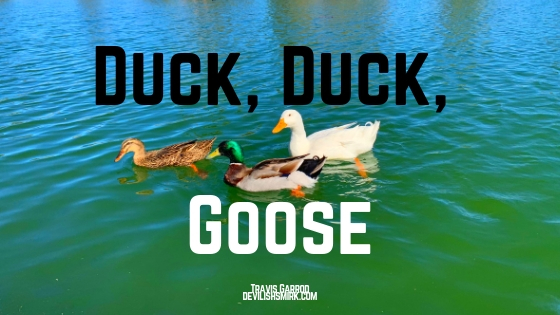 It finally happened; another word made the list of my personal, verbal equivalents to nails on a chalkboard.

Don’t get me wrong, communication is key component to building a civilized society, especially a connected one.

When it comes to elections, it no longer matters what candidates say. They’ve had decades to figure out where they stand.

What matters is what they have done and continue to do.

Actions matter more than anything.

“Conversations” don’t need to be brought to Washington.

If a politician hasn’t developed an opinion beyond dinner table discussions, they have no business running for president.

Birds of a Feather

Today’s political scenario – this level of synchronicity between the media, our government’s behavior, and public reactions – appears categorically unnatural.

Motives can yank anything natural from everything. Let’s see where you stand.

Nobody needs a new job title to take a stance.

Today, the same, (and more dangerous), tools are used to uproot political discourse amongst all of us since we were born: Political platforms. Both would have us believe we’re all fucked up.

20 years ago, Columbine happened and we’re still talking about guns. Somehow, sexuality is an issue and the Supreme Court is close to weighing in on whether or not I can be terminated for being me.

Abortion, religion, marriage, love, war, and Jesus are still arguments, and women still only make $0.70 to every man’s dollar, another statistic that appears unchanged from 20 years ago.

In the past 20 years, the Electoral College flipped the popular choice for POTUS results – twice!

What are the odds?

20 years ago, the Berlin Wall stood in history.

Today, we live in a country declared national emergency over funding of a wall.

The presidential field is filled with fodder. I’m trying not to be too critical as there are other ongoing things from which we’re being distracted, so I’ll stick to the main careless goose: Donald Trump.

We can’t blame Trump on Trump. Trump happened as a result of something. A lot of somethings. Ever since the 2016 election, it’s been a turmoil spill.

The man who is responsible for “grab ’em by the pussy” in our vernacular is POTUS.

Our president reminded us how much of a fan he is of General Lee with his most recent defense of his “very fine people on both sides” Charlottesville, VA blunder.

Bill Clinton was impeached 20 years ago. By the same standards, Donald Trump would already be gone.

Before that, though, President Trump must face the music or we’re doomed to repeat something even more unsavory.

The Criminal Goose Goes to Jail

Hanging somewhere over us is the truth. It’s been captured. Rest assured things never end well for the criminal.

The challenge about truth is finding it. Once it’s found, it’s better to be on the right side of it, or figure out a way there.

There is such a thing as too little too late.

Karma’s planning her own party. It’s no sweat off her back if she’s late. The last thing she wants to do is disappoint her guests.

The Courageous Goose Doesn’t Give a Duck

Would you fly under Trump’s wing in a V formation? Do you trust the lift of the upwash from the wingtip vortices of that HBIC (head bird in charge)?

Donald Trump never intended to win the presidency. His entire transition debacle made that evident. That, and his complete inability to keep his most senior positions filled.

It’s been a cascading turmoil slick ever since.

The President is too divisive of a figure at present time.

I wouldn’t be surprised if he ends up resigning. Any advisor to him who’s worth the dirt they walk on would encourage resignation this point.

I’ll be more surprised when this charade ends.

If it were up to me, this would have been over years ago. But, it’s not. Oh well.

The sooner we rid him from our marred democracy, the better off the country will be.

What a day that will be.

Until then, brace yourselves for a bumpy ride.